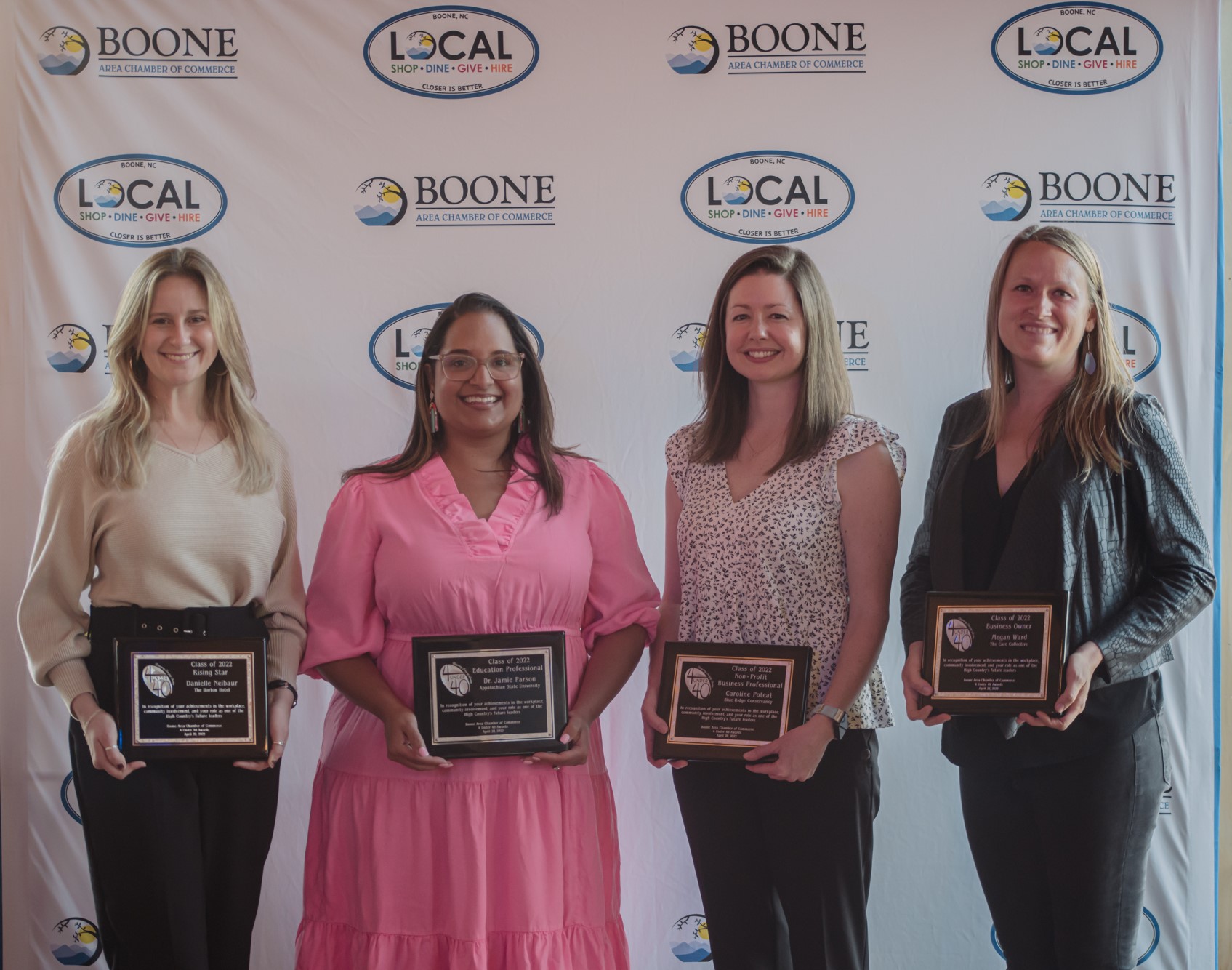 Four emerging leaders and a community advocate were honored during the 6th annual Boone Area Chamber of Commerce 4 Under 40 Awards ceremony. The event was hosted Thursday evening, April 28th, 2022 in front of a crowd of over 150 attendees at The Mill at Rock Creek in Boone. The 4 Under 40 awards are presented annually by Appalachian Commercial Real Estate.

Over 30 nominations were submitted by local community members and 16 finalists were recognized during the event. Nominees were sought in the categories of business owner, education professional, non-profit business professional, and rising star. A biography of each award winner is listed below: 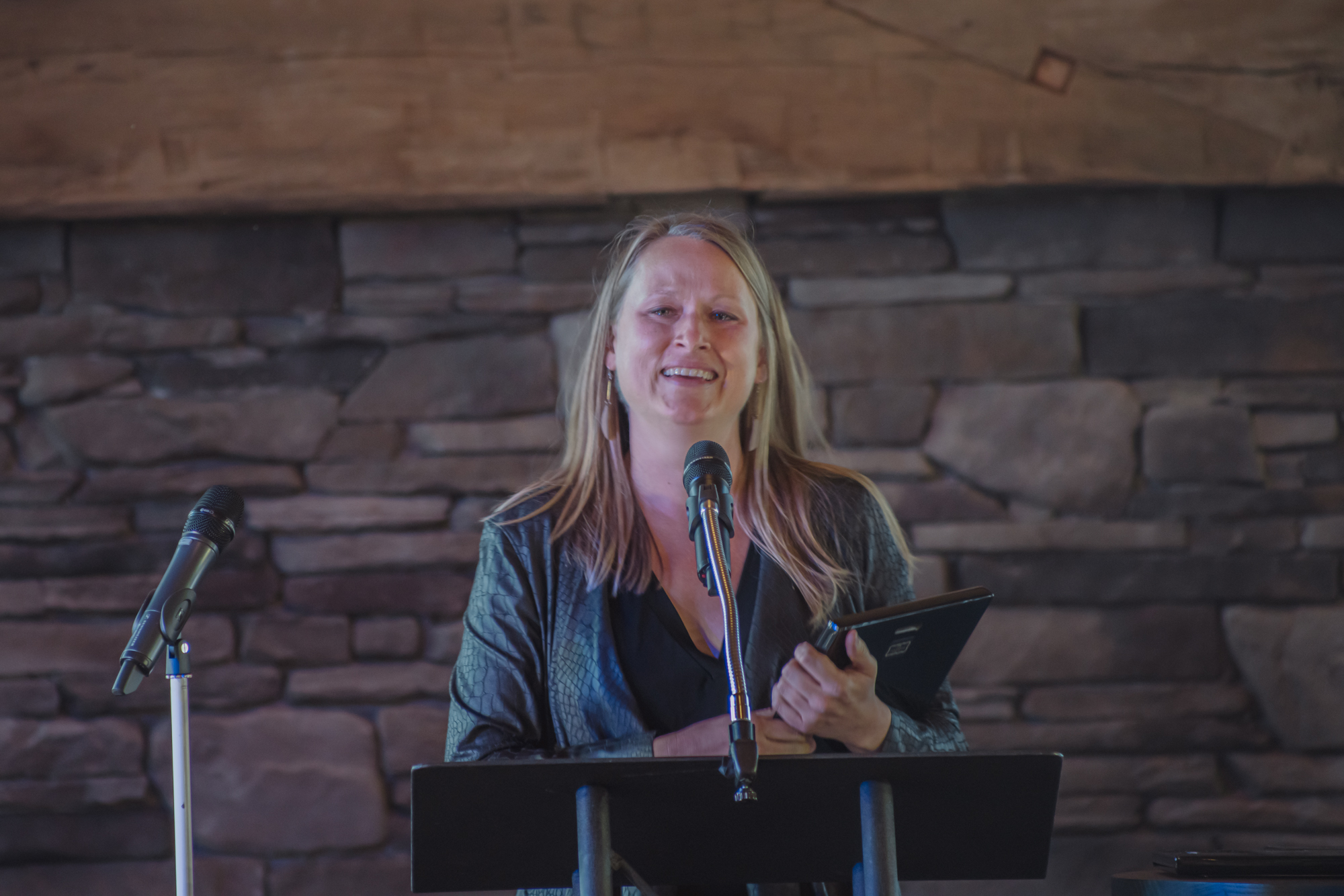 Megan Ward is a Watauga County native, growing up in Zionville, attending Mabel School, and graduating from Watauga High School. She stayed close to home to attend Appalachian State University, where she graduated with a degree in Business Management and minors in Art and Art History in 2007.

Shortly after graduation, Megan began her path toward becoming a massage therapist, completing her training and becoming fully licensed in 2010. Her first business venture was opening Everybody Massage & Bodywork in 2011. Four years later she opened The Care Collective inside Shear Shakti in downtown Boone, hiring her first employee in 2015.

After a successful six years of business in downtown, Megan moved The Care Collective to a new space inside the Forestview Professional Building on State Farm Road, expanding services and growing her staff to 16 professionals. The team at The Care Collective works from the mission to mindfully serve the community, helping clients heal injuries, avoid surgery, find relief from chronic pain, reduce stress, and maintain a pain free body. 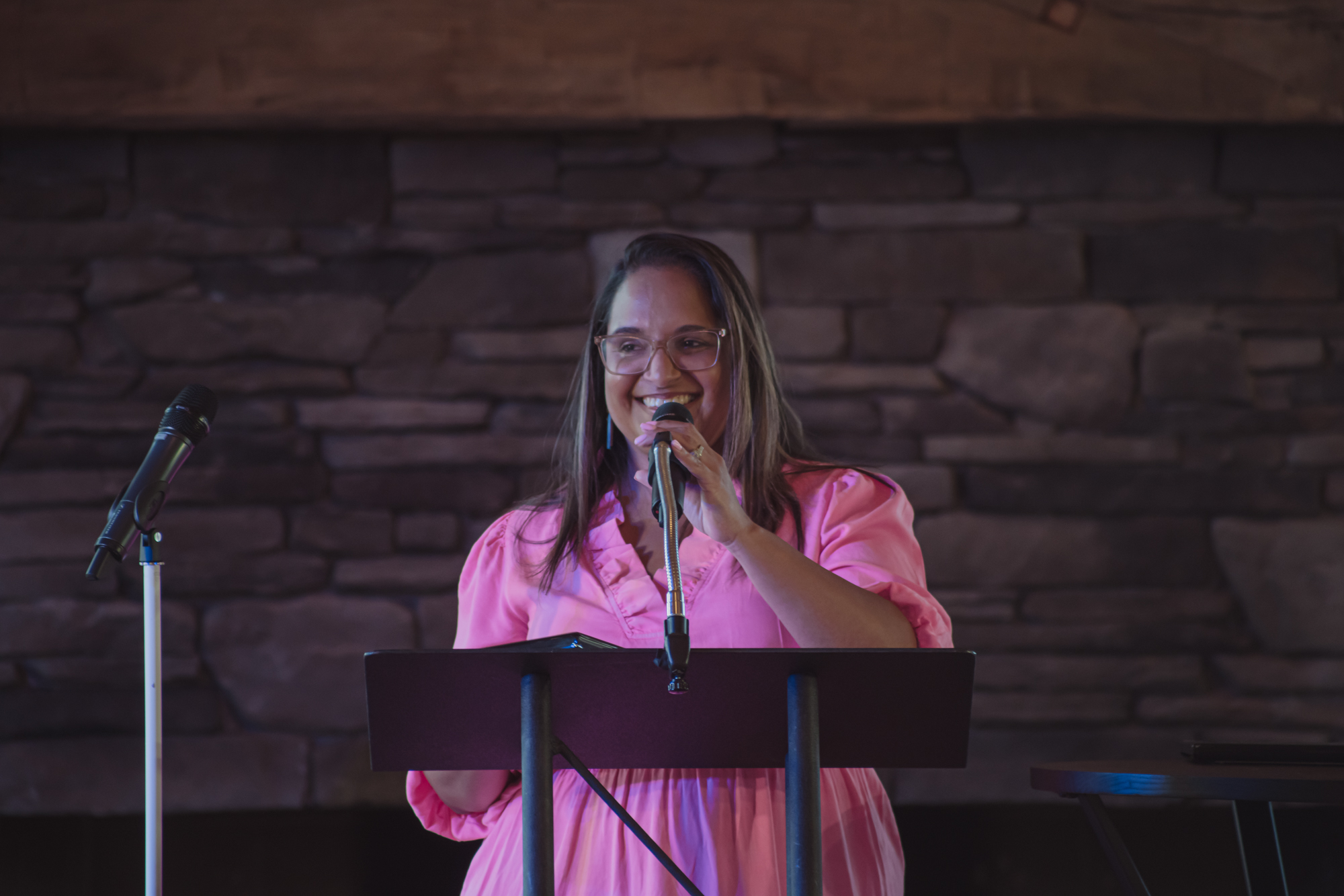 Dr. Jamie Parson is the Interim Chief Diversity Officer and an Associate Professor in the Department of Finance, Banking, and Insurance at Appalachian State University. She teaches undergraduatecourses in business law and insurance. Dr. Parson previously led the Walker College of Business’ Inclusive Excellence Team, served as the Diversity and Inclusion Coordinator for the Brantley Risk and Insurance Center and served on numerous boards and committees.

Prior to arriving at Appalachian, Parson served as a Title VII Investigator for the Nebraska Equal Opportunity Commission and a Special Investigative Unit Liaison and Fire Claims Representative at State Farm Insurance Company.

Dr. Parson holds a Bachelor of Science Degree in Sociology-Anthropology from Nebraska Wesleyan University and a Juris Doctor from the University of Nebraska College of Law in Lincoln, Nebraska. Her research interests primarily concentrate in the area of insurance regulation including extensive involvement with the passing of the North Carolina Foster Care Family Act. 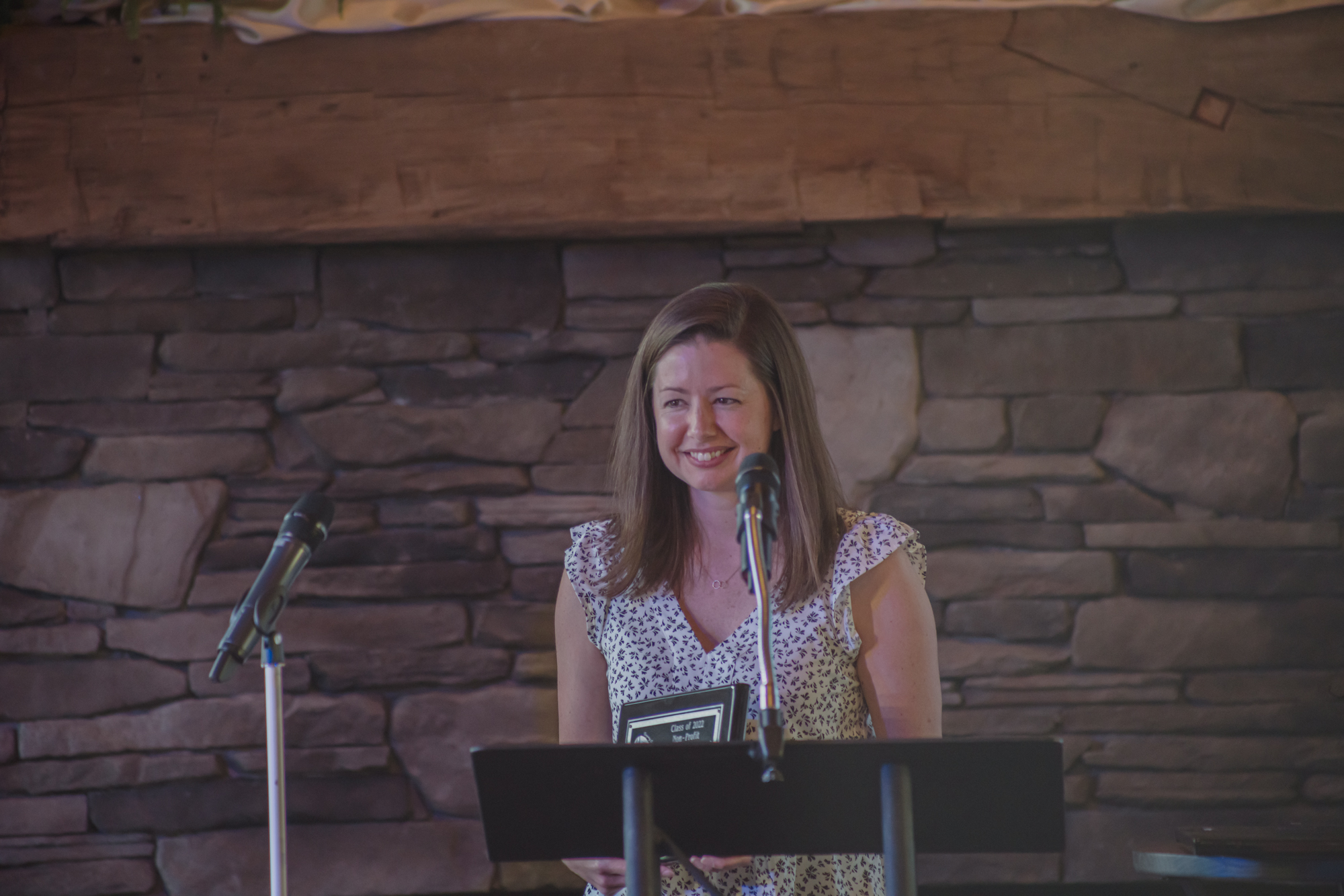 Caroline Poteat was born and raised in Drexel, North Carolina. After earning a Bachelor’s Degree in Political Science from American University in Washington, DC, she moved to Boone in 2006 to pursue her graduate studies at Appalachian State University. She holds Master’s Degrees in Appalachian Studies and Geography. Since 2018, Caroline has served as Director of Development for Blue Ridge Conservancy.

Prior to joining the Conservancy, she served as Executive Director of Valle Crucis Community Park for nearly a decade. Caroline is passionate about philanthropy and community service, particularly related to the environment and women’s issues. Her past board and committee memberships include the High Country Chapter of Trout Unlimited, Girls on the Run of the High Country, the Blue Ridge Conservancy Land Protection & Stewardship Committees, High Country Local First, and the Town of Boone Planning Commission and Affordable Housing Task Force. She is a member of the Boone Sunrise Rotary Club and serves as Vice Chair of the board of directors of the Women’s Fund of the Blue Ridge.

In 2021, Caroline was honored as a Trailblazer by Business North Carolina magazine, recognizing professionals under the age of 40 who work in North Carolina cities and towns of fewer than 100,000 residents. 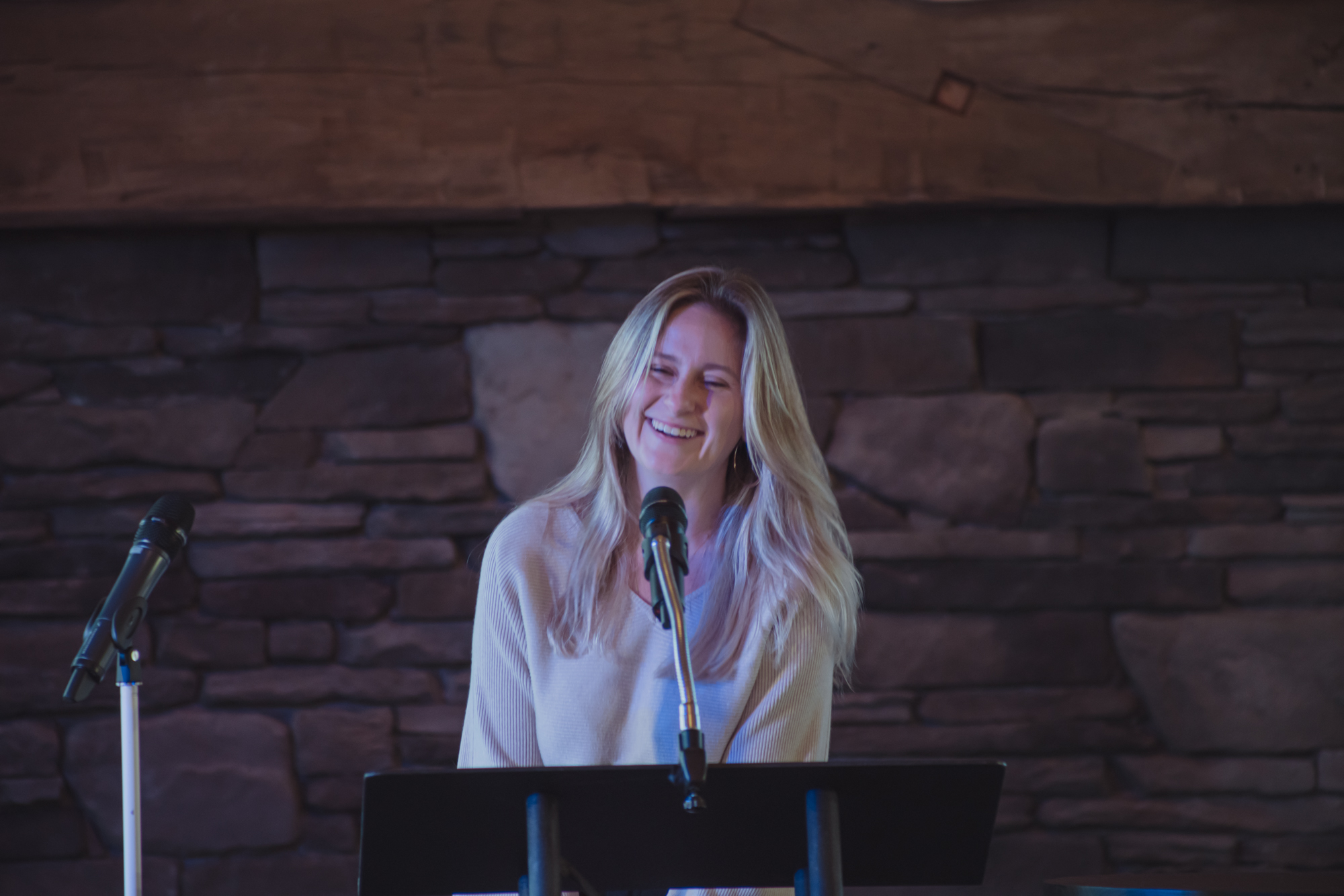 Danielle Neibaur was born and raised in Homestead, Florida. Upon graduating high school she relocated to the High Country to become an App State Mountaineer.

She graduated from Appalachian State University in May of 2018 with degrees in Hospitality and Tourism Management, Marketing, and a minor in Dance. As an undergrad, Danielle held leadership roles in several campus organizations and completed an internship with The Walt Disney Company. It was through the Disney internship that she discovered a passion for customer service and landed a position with The Inn at Crestwood, where she started as a front desk associate and worked her way up to the role of General Manager. Danielle coordinated a remodel of the facility and worked tirelessly to keep the doors open during the COVID-19 pandemic. She also found time to complete her Masters in Business Administration with a concentration in Leading and Human Resource Management at Appalachian State, graduating in 2020.

In February of 2022 she accepted the role of General Manager at The Horton Hotel in downtown Boone. Danielle continues to seek opportunities to engage and volunteer with organizations throughout the High Country. 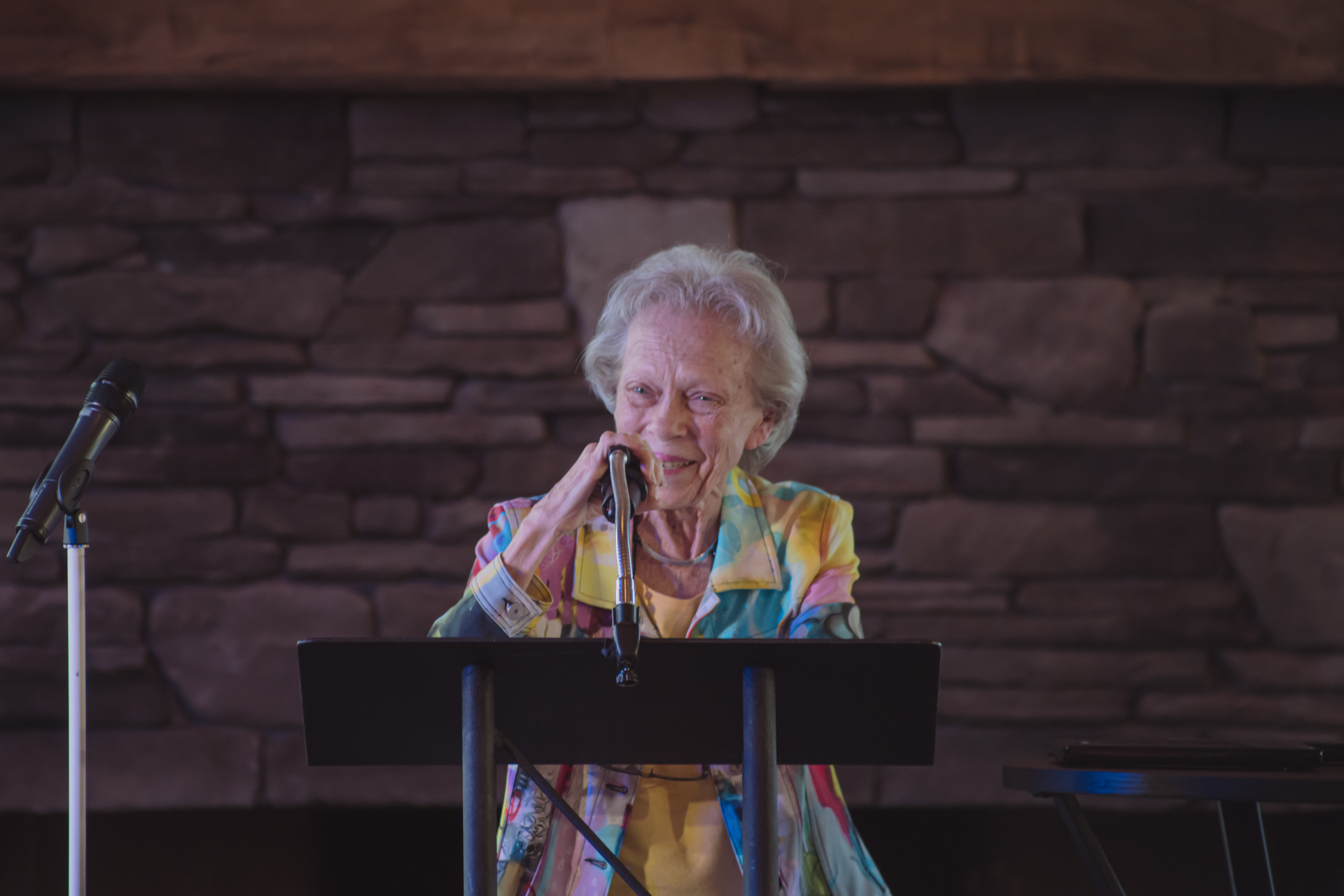 Reba Moretz is a pioneer in both the education and tourism industries that have been signature components of the High Country’s unique quality of life.

Earning both a bachelor’s and masters’ degree in music from Appalachian State Teacher’s College in the early 1950s, her career in education started as a local educator, teaching at Parkway School for eight years as both a classroom and music teacher. In 1968, she and husband Grady opened Appalachian Ski Mountain, and Moretz’ passion for education helped lay the groundwork for the creation of the French-Swiss Ski College, a ski-school that helped introduce people of all ages to winter sports activities and would serve as a catalyst for the exponential growth of the ski industry that we see today in the Southeast United States.

While Moretz was a formative figure in the creation of the ski industry North Carolina, Appalachian State University remained a priority for the education advocate. Her campus experience started earlier than most, moving to Boone with her family at the age of three. Her father, Dr. Wiley F. Smith, taught at Appalachian from 1936-1964 and was the Department of Psychology’s first chairperson. She has known every president or chancellor of the university from Dr. B.B. Dougherty to current chancellor Dr. Sheri N. Everts.

Throughout her career, Moretz spent countless hours providing guidance to university boards and committees. She was a member of the Appalachian State University Board of Trustees for eight years and also served on the University’s Board of Visitors. In 2015, the Appalachian State Alumni Association awarded Moretz an Outstanding Service award during its annual Alumni Awards Ceremony, citing her exceptional service to the university. She and her family have financially supported numerous areas of the university and have lent their expertise into helping form many signature programs, such as An Appalachian Summer Festival.

Whether through her professional associations or support roles with community service organizations, Moretz has set the standard for mentoring and support of students and young business leaders. During her time as an Appalachian State trustee, her campus visibility and openness as a communicator gave faculty, staff, and students a strong voice and willing advocate in addressing the needs of a growing university. Her time spent talking young professionals through business and life decisions was only matched by her persistence in following up with those she mentored, making sure they had a trusted supporter that would fuel the confidence they would use to tackle life’s next opportunity.

"The depth and experience represented in this year's group of finalists once again shows the quality of emerging talent that will lead our community through our next set of challenges and opportunities," said David Jackson, President of the Boone Area Chamber of Commerce. “It's meaningful and exciting to see women make a clean sweep of each of our categories. It's a visible sign that communities like ours are made stronger by embracing all perspectives. Reba Moretz is a shining example of the impact women have had during pivitol moments in the development of our community. The achievements displayed by those recognized today will further motivate the next generation of leaders that will guide our community in the years to come. ”