Over 420 members of the High Country business scene attended the 70th Annual Membership Meeting of the Boone Area Chamber of Commerce Thursday night, August 1st, 2019. The event was presented by Skyline/Skybest and was highlighted by a keynote presentation by Andrew Davis along with the presentation of seven community awards to local business leaders. Red Moon Hospitality catered dinner and dessert inside the Holmes Convocation Center on the campus of Appalachian State University. 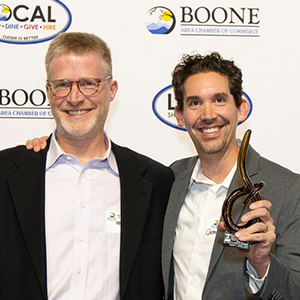 Booneshine Brewing Company completed a move to a new production facility and a 3,500 square-foot  tasting room in East Boone during the past year. Started in 2015 by Tim Herdklotz and Carson Coatney, Booneshine increased its production capacity from 1,500 barrels of beer per year to over 4,000 after the move.

The  Alfred Adams Award for Economic Development recognizes individuals and/or organizations who have worked for the orderly growth and development of Boone and Watauga County. Adams served as a local banker and provided an influence on many Chamber committees in the organization’s formative years. 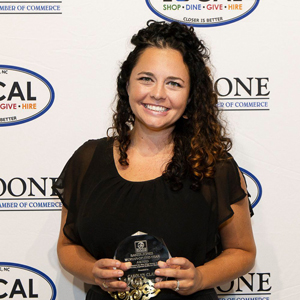 Carolyn Clark, Founder, After Ever Communications, LLC , started her own Public Relations Firm to assist international business brands with corporate communication strategies. She serves as a member of the Silicon Hollar Advisory Board, assisting local entrepreneurs in the High Country with growth planning and ideation. She is an adjunct professor in the Appalachian State University Department of Communication and is Past President of the App State Alumni Association.

The Baker-Jones Woman of the Year award is named for long-time Chamber volunteers Gillian Baker and Susan Jones. This award honors an inspiring member who exemplifies the qualities of leadership, mentorship, and community involvement. 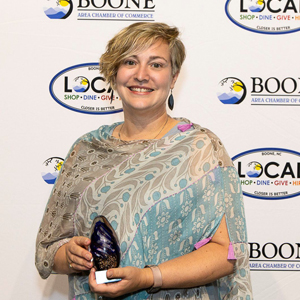 The Back 2 School Festival is an annual event that aids any Watauga County Family that is struggling to afford the high costs of sending their children back to school. In 2018, nearly 1,200 children were served by the program. Over 2,000 people attended the festival that is funded largely by business, non-profit, and faith community support and volunteer hours.

The Dan Meyer Community Partnership Award recognizes a community leader for their efforts to bring multiple parties together for a common cause. Meyer served as President/CEO of the Chamber for 12-years before retiring in August of 2016. 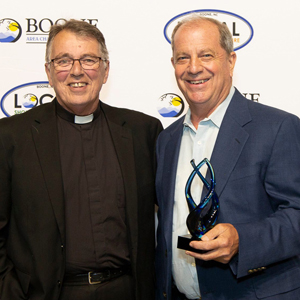 The Sue W. Wilmoth Award for the Advancement of Tourism is named for the former Chamber Director, who used her influence in tourism promotion to capitalize on the region’s natural resources while balancing progress with preservation. 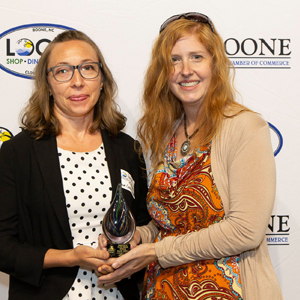 The Cove Creek School Solar Array is a 5-kilowatt photovoltaic array that was installed at the school thanks to the help of NC GreenPower, a group that supports renewable energy carbon offset projects by providing grants for solar installations at K-12 schools across North Carolina. Cove Creek students and families raised more than $14,000 in corporate and local support to assist with installation. Beyond supplying the school with a portion of its power, the new solar array is also equipped with a weather station and allows for real-time monitoring of the system’s output and performance. The system is designed with education in mind, its addition to the school is paired with curriculum-based content to help students learn how solar power systems are incorporated into the energy grid.

The evergreen Award is presented to a business, organization, project, or person who has furthered the inclusion and integration of sustainable development principles. 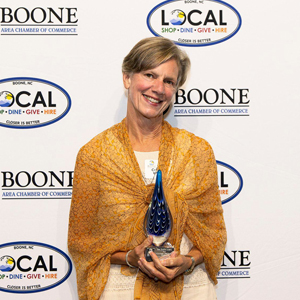 Cindy Wallace, Chair, Western Youth Network Board of Directors, has been a part of the Boone community for over three decades. She was first introduced to WYN during a long career at Appalachian State University. Wallace advanced her involvement with the organization by joining the Board of Directors in 2016. In her year as Chair, she assisted in organizing efforts to aid WYN staff in administering events, projects, and programming.

The Ben Suttle Special Services Award, named for the former Boone Town Councilman, recognizes the spirit of volunteerism in the community. 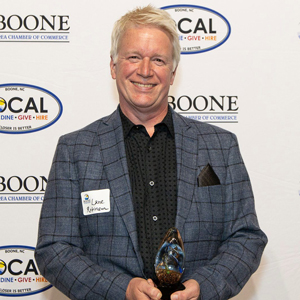 Lane Robinson, Owner, Creekside Electronics has been involved with numerous High Country organizations as a native to the area. He recently completed a year as President of the Boone Sunrise Rotary Club and maintains an active role in volunteer and project support with the organization. He currently serves as Vice-Chair of the Southern Appalachian Historical Society Board of Directors, helping the group administer the annual Horn in the West outdoor drama. Robinson donates time to Western Youth Network, helping spearhead the Men for WYN initiative. He frequently donates items from his family business, Creekside Electronics, for silent auctions and fundraisers for local non-profit organizations.

The Wade Brown Award for Community Involvement is the Chamber’s oldest award, dating back to 1979.  Named after the first recipient of the honor, this award recognizes a significant contribution through community engagement. 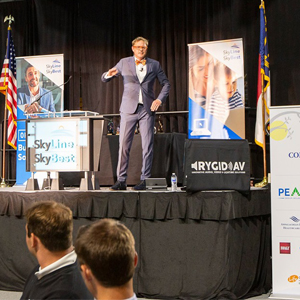 In addition to the annual awards presentation, keynote speaker Andrew Davis delivered a 45-minute address titled, The Laws of Attraction: How Daring Dreamers Turn Serendipity Into Success. The presentation outlined communities that have seen successful outcomes after staking a marketable claim based on the strengths of the area. The keynote address was presented by Capital Bank, N.A. Edward Hinson, Chief Marketing and Sales officer at Skyline/Skybest delivered remarks around the way that the company connects the High Country through innovation, expansion, and community support. Paul Forte, Vice Chancellor of Business Affairs at Appalachian State University delivered welcoming remarks to the audience on behalf of Chancellor Dr. Sheri Everts. 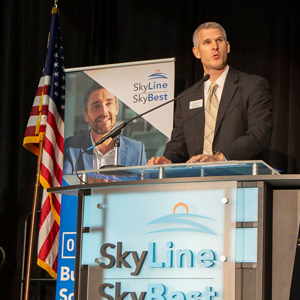 The Boone Area Chamber of Commerce introduced David Still of RaysWeather.com as its Board Chair for the 2019-2020 year. During his remarks, Still detailed the success of the Boone Business Exchange, which has logged over 390 referals leading to nearly $1.2 million dollars of closed business in its first 16 months of existence. He also mentioned the future rebranding of Watauga Leadership Challenge to Watauga Leadership Institute, along with additional programming that will fall under the WLI umbrella in the coming months.

Yolanda Adams, Hope Caroselli, Maelea Galyon, Katie Greene, Graham Holsehouser, and Heidi Ragan were introduced as new members of the Chamber Board of Directors, having started three-year terms on July 1st. Tim Hodges and Jason Reagan were among six outgoing Board members who were recognized for their service during the event.