The Town of Blowing Rock officially proclaimed the month of July as “Middle Fork Greenway Month,” and the activities that ensued certainly lived up to its name. An unprecedented number of businesses worked together to raise money in support of constructing the next section of greenway trail that will eventually connect the towns of Blowing Rock and Boone with a pedestrian and bicycle friendly alternate route that benefits residents, visitors, and businesses of Watauga County.

The Round Up for the Middle Fork Greenway rallied support with a first-ever community-wide fundraiser by 118 businesses throughout the county. Businesses participated by asking their customers to round up their purchase to the next dollar or give to a donation jar. Some businesses gave a percentage of their sales for the month or gave a one-time donation. The collective effort raised $112,000 and counting as donations continue to come in.

“The Middle Fork Greenway project is one of the single most significant economic development projects currently in motion in Watauga County. The sooner this project is completed, the sooner the economic impact of this unique connecting of Boone and Blowing Rock can begin to pay dividends,” said David Jackson, President of the Boone Chamber of Commerce. “We are thankful so many local businesses and individuals took the opportunity to raise funds for this effort. It was only natural for the Boone Area Chamber of Commerce and the Blowing Rock Chamber of Commerce to do our parts in helping to not only raise funds but help recruit more participants to the roundup effort. The ability to show such unwavering community support for the project will only help Blue Ridge Conservancy leverage more gifts in the future. We are excited to see what happens next!”

“The Middle Fork Greenway Round Up has definitely shown that both our visitors and residents are big greenway fans and are ready to step up and support it when they have the opportunity,” said Brad Moretz, co-owner of Appalachian Ski Mountain.

“I'm an avid runner and I believe in the power of being outdoors and being active and because of that, I am strongly supportive of the greenway. Ray's Weather was honored and privileged to support this effort and thank you to our readers for helping us help the Middle Fork Greenway,” said Ray Russell, owner of Ray’s Weather.

“The community support and enthusiasm for our July Round-Up has been outstanding and we are already looking forward to setting a new goal for next July 2019.  This July’s Round Up created a passion for the Middle Fork Greenway that has become contagious.  I would like to extend a special thank you to Mystery Hill for their very exciting, generous donation of $10,000!” said Brenda Speckmann, co-owner of Appalachian Ski Mountain. 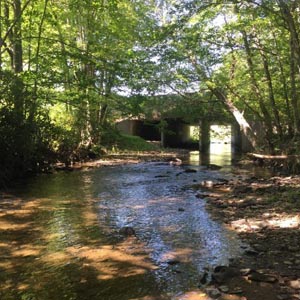 The Round Up success was well timed with the exciting news of Watauga County receiving a grant for $430,000 designated for Section 4 of the Middle Fork Greenway from the North Carolina Parks and Recreation Trust Fund.

N.C. Parks and Recreation Trust Fund awarded over $6.7 million in grants to fund 27 local parks and recreation projects across the state. The Fund is administered through the state Division of Parks and Recreation and was established in 1994 by the N.C. General Assembly. Watauga County was one of the largest recipients of the 2018 PARTF grant cycle receiving $430,000.

“Being approved for PARTF funds is crucial to our efforts to construct the Middle Fork Greenway. I am grateful that the Parks and Recreation Trust Fund Authority recognized the worthiness of our project. These funds will go towards the section of greenway between Tweetsie and Niley Cook Road. I am looking forward to continuing to work with the Blue Ridge Conservancy to complete the greenway,” said Joe Furman, Director of Watauga County Planning and Inspections.

Blue Ridge Conservancy purchased a 12-acre linear tract within the Section 4 stretch in 2016.  The land is two-thirds of a mile along the Middle Fork of the South Fork New River, enabling an extension of the existing Middle Fork Greenway from Tweetsie Railroad to Niley Cook Road, and the connection of two existing pocket parks.  The land will provide a vegetated buffer to protect the water quality of nearby streams feeding into the Middle Fork New River, the main water supply for both Boone and Blowing Rock.

The PARTF grant requires a dollar for dollar match. Proceeds from the Round Up will help to cover the match, along with funding from the NC Division of Water Resources and the Watauga County Tourism Development Authority.

“There is so much momentum right now with receiving the PARTF grant. There are some significant financial gaps to fill, and that is where the ‘Round Up’ comes into play.  The Round Up model proved highly successful, and we will continue using this strategy for leveraging state and federal grants with local financial support to complete the 6.5-mile vision of connecting Blowing Rock to Boone, naturally,” said Wendy Patoprsty, Middle Fork Greenway Director.

Fundraising efforts will continue as additional funds are still needed to begin construction of Section 4 from Tweetsie Railroad to Goldmine Branch Park. Businesses and individuals are encouraged to consider donating to the Middle Fork Greenway to support the progress of this High Country Legacy Project.

Construction will begin this Fall for the Blowing Rock Trailhead. The 1.3 miles of Section 1 in front of Shoppes on Parkway, under the Blue Ridge Parkway, to the Appalachian Regional Healthcare System’s Foley Center at Chestnut Ridge is targeted for construction in 2019.