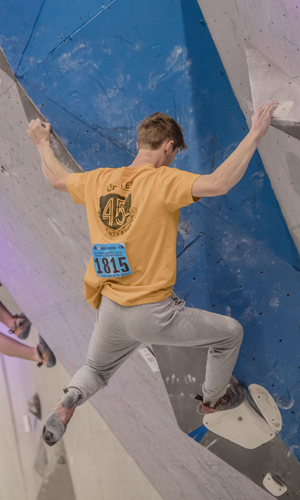 ​​Kiser, an 18-year old Boone native, won the National title in the Youth Division. This competition brought together the top climbers in America that are 18 years and younger, many of which have experience competing in Open Nationals, where the best climbers in the country compete, regardless of age.

To qualify for the National tournament, competitors had to place in the top ranks within their State and division. Boone climbers participate within the Southeastern US Division.

Kiser trains at Center 45 Climbing & Fitness in Boone and has quickly ascended the ranks as one of the Nation's top competitors after picking up the sport just 3.5 years ago. He performed well in preliminary competition during the event's opening two days, earning a spot in the Top 10 Finals round Sunday evening. Kiser's victory not only saw him top the list of finishers, but he was the only competitor to complete all three of the final boulder problems.

Zoe Nelson, another Center 45 climber, also competed in the event and performed well enough to advance through the quarterfinal round of the tournament. 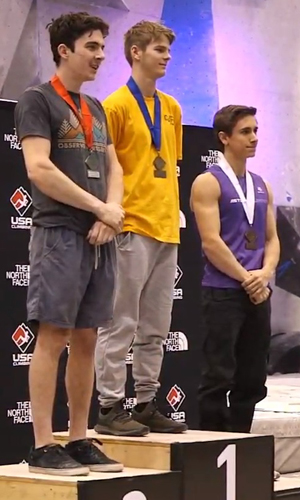 Coaches Jeph Verner and Sarene Cullen and Center 45 Climbing co-founder and general manager Aaron Parlier traveled to the event to support both athletes.

This victory places Kiser on the map as one of the elite competitive climbers in the country and qualifies him to compete at the World Bouldering Tournament this August in Arco, Italy.

During his short career, Kiser has completed some of the most difficult outdoor bouldering routes in the High County region. He is the son of Dan and Erin Kiser and is one of seven siblings.

Elijah’s Final round at the 2019 National tournament can be viewed here: https://www.youtube.com/watch?v=STm-UC_Vdn8